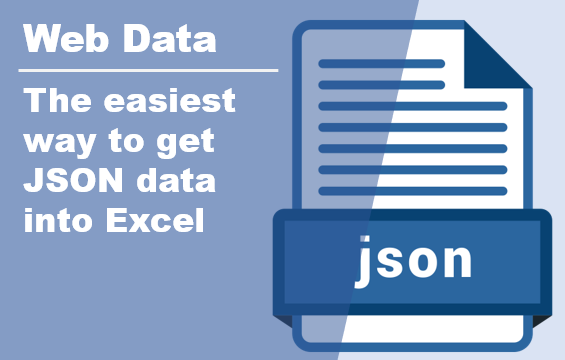 One increasingly common task for Excel users is to retrieve data from the internet.

Simply, retrieving data from the web is the first challenge.

This sounds simple enough (and as you’ll soon see, it is).

But most people run into a roadblock with the second challenge: wrestling with data in JSON format.

Read on to discover the easiest and fastest method to get JSON data into Excel...

How to Import & Parse JSON Data with VBA

You’ve got several approaches to parsing data from the web which is in JSON format:

You could write your own VBA code to parse the JSON data.

This approach is only recommended if you have acute masochistic tendencies.

This path (of parsing JSON) has been travelled by others before you.
Leverage off their work 😉

You can use free or open-source VBA libraries like VB-JSON or VBA-JSON.

While many of these libraries do work, some do have their own issues, may not be supported and often suffer from performance issues.

You could buy a parsing library from a third-party provider.

But if you’re in a corporate environment, you may find it difficult to purchase non-standard software products.

In one recent project, it took 93 days from request to authorisation to installation to get my favourite VBA productivity suite, MZ-Tools installed.

Good thing I wasn’t in a hurry.

At the end of the day, Excel is just one big component.

What this means is that we can leverage other COM components and libraries quickly and (usually) easily.

Oh, and did I mention they're free 🙂

What the heck is JSON?

Before we get cracking, let’s give a little attention to JSON.

JSON, which stands for JavaScript Object Notation, is another method of structuring data, although it doesn’t use tags.

Originally designed for JavaScript, JSON is now used widely for transmitting data between apps and across the web.

You can read all the gory details here.

Using a Web-service to Get Data

The web-service we’ll use to get data in JSON format for this example is Datamuse.

Datamuse is a word-finding query engine. It lets you retrieve a list of words based on a variety of criteria including meaning, spelling, sound and vocabulary.

For example, you could retrieve a list of words related to duck that start with the letter ‘b’, or adjectives that are often used to describe ocean.

The Magic of COM Libraries

You’ll be using two COM libraries to do all the heavy lifting for you.

The first is the Microsoft XML parser library which also includes the ability to query a website and retrieve data.

The second is the Microsoft Script Control

The first thing you’ll need to do is set a reference to the Microsoft XML parser library in the Excel Visual Basic Editor (VBE):

You should find the Microsoft XML library in the list of References.

Its exact location may differ on your computer.

Once you’ve done that, in a new module, enter the following VBA function.

You can see it accepts a web URL as an input parameter and will return some text (as a string).

So, what’s it doing?

Let’s test it out.

Enter this routine above the GetResponse() function.

Give me a list of adjectives used to describe the word ‘ocean’.

Let’s test it out.

Enter the following test routine above the GetResponse() function.

This query says: Give me a list of adjectives used to describe the word ‘ocean’.

If you pasted this URL into your web browser, it’d look something like this:

You've got a clean and simple way to retrieve data from a web-service.

Now you just need an efficient way to parse the JSON and load it into Excel.

Now set a reference to the Microsoft Script Control in the Excel VBE:

The script control has several other purposes, including the interpretation and execution of scripts in a host application.

But for your purposes, you just need it to parse JSON.

Enter the following function in your module:

Now you have a simple routine to parse your JSON data, enter the specific data you want into an array and tell you how many items it found.

What’s in the JSON?

Before we look at the code in more detail, let’s take a quick peek at what’s inside that JSON object we retrieved from the web-service.

Remember, what was returned is a JSON object, not a VBA array.

However, you can peer inside the object as well as loop through it to pluck out data you’re interested in.

When the MS Script Code does is convert the blog of JSON text you saw in the browser screenshot above to something structured.

If you looked at it in the VBE Locals window, it would look like this:

Okay, to be pedantic, it’s a JScript – Microsoft’s ‘version’ of JavaScript – object.

How did you know the element you wanted was called “word”?

It’s right there in the JSON string that you retrieved earlier.

Remember, JSON is composed of a couple of simple data structures, the main one being an unordered set of name/value pairs (essentially a dictionary).

Now that you’ve looped through the object and populated the array that was passed by reference, the function returns a count of how many items were found.

Now let’s see it in action.

Update the Test_GetResponse routine so it looks like this:

If this returns a value greater than zero, you swing into action and define where you want the list of words entered and assign the array to that range.

The eagle-eyed among you probably noticed that you’re also flipping the array using the worksheet Transpose function before assigning it to the Target range.

Meanwhile, you should now have a list of words in worksheet one.

You could have used this to populate a listbox, create a report, anything you'd normally do with extract data.

Admittedly, the JSON data structure used in this example was not very complicated. However, the same principles apply to more complex data structures.

Take your time to example the returned data in the Locals window and you'll be in a better position to parse even the most complicated JSON data.

What challenges have you faced importing and processing JSON data into Excel. How did you solve them?

Let me know in the comments below.

If you're still wrestling with some JSON data let me know about that too.

Marcus has been an Excel & VBA developer for over 20 years working in the trenches in Investment Banks and Assets Managers, previously in Melbourne and now in London.

Please log in again. The login page will open in a new tab. After logging in you can close it and return to this page.